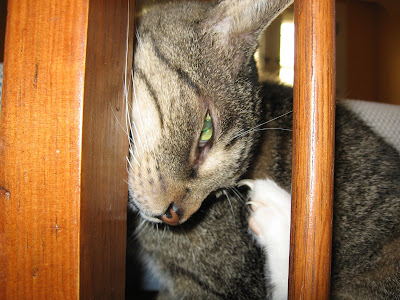 He is thirteen years old and is the smartest cat I have ever met. He is also thoroughly neurotic.

Most likely the product of too much inbreeding, Eli can go from happy purring to a psychotic episode in a millisecond. As a younger cat he would sometimes attack pretty viciously from out of nowhere (and he once had to be quarantined after biting a neighbour. He responded to his confinement by pissing all over our apartment). This, thankfully, has stopped. He is much mellower now (although we discourage the kids from petting him and we watch for the signs that he is getting too excited).

We often remark that he could almost fool us into thinking he's a nice cat.

We like to say that Eli learned to turn his anger inward. He frequently licks himself raw in various places on his body. And recently, he has started to chase his own tail.

He gets really mad when he catches it. At first this was really funny. He would chase his tail, catch it and then, invariably fall off the bed or the couch. He would even hiss and spit as though he'd been attacked (when I asked my vet about this, he used the very scientific term, "insane" to describe the cat's clinical condition).

It's not funny anymore.

When we came back from our week at the cottage, we found blood all over the kitchen floor and Eli had an ugly gash in his tail. I think the poor thing was just desperately lonely while we were gone (he has become very social in this, his eighth of nine lives). We had someone coming in to look after him most days but I don't think this was enough for our crazy cat.

Our vet (who is thorough, compassionate and very cute and with whom I am half in love - I don't understand why all my single straight girlfriends don't acquire pets just so they can have him over to their house) had warned that this might happen and suggested that we keep rescue remedy on hand. I was worried about giving it to him but he seems to love it (it smells very boozy; I suspect we are making him drunk) and jumps up on the garbage can to drink it from the dropper.

It seems to be working. The vet did warn us that sometimes in these kinds of cases, the tail needs to be amputated because the cat just can't leave it alone.

He has relaxed a lot since we stopped letting him go outside (more than ten years ago) and he loved living with another cat. But when our younger cat died of (genetic) kidney failure, we agreed that we could not get another, as D., my youngest son, is allergic.

Eli has been a source of much entertainment for us over the years (and more than equal amounts of stress) and we find that we are oddly attached to him despite the trauma he has inflicted on us (could it be Stockholm syndrome?).

How many cats can claim that they once removed a screen from a window, left it propped up against the wall and went out for the evening?

We used to say that the only thing keeping this cat from true independence was his lack of opposable thumbs. Now, it seems that in his dotage, he needs us.
Posted by laurie at 12:39 am

Email ThisBlogThis!Share to TwitterShare to FacebookShare to Pinterest
Labels: cat

aw, what a loving tribute. I can see Eli grinning as he thinks, "See, I have them exactly where I want them" before scaling the door to perch until you walk through it later.

I had a cat who was a little on the neurotic side too. he would do the purring thing, and then just start attacking me out of nowhere. He would also start running wildly through out my house and his pupils were fully dialated.

WE had a crazy cat too. She would flip from purring to biting and it was hard for me to like her (with the 6 month old and 3 year old at the time). She too would run wildly around with dilated pupils like mommyof2galz....
She had gotten a taste for the outdoors though, and died on the road in front of our house.
It took me a long time to agree to a new cat. 10 years later we have Spooky. He is lovely, quiet and blissful sane.