I don't write in this space very often these days and I don't know how many people still read my words. I'm not sure if I've done a good job of expressing myself. My friend made me realize last night that I have a responsibility to use the platform I have, to say something to anyone who might be willing to listen.

Yesterday evening, I sat down at the computer to check Twitter, as a stalling tactic before cleaning the kitchen. It was well past midnight when I stood up again.

I was reminded as soon as I logged in that the decision of the grand jury in Ferguson, Missouri - about whether or not to indict the police officer who killed a young unarmed black man - was due to come down shortly. In the end, it took a couple of hours for the announcement to be made. Though most people commenting in my Twitter feed were not surprised by the outcome (the delay in announcing had made many suspect that the result was a foregone conclusion), they were outraged. This was exacerbated by the terrible way in which the grand jury handled the release of the verdict: at night, with many hours of anticipation during which the world saw heavily armed soldiers and military tanks line the streets of the town. The lengthy speech made by the prosecutor seemed designed to fan the flames, as he first blamed social media and then further trashed the reputation of a young man who is no longer alive to defend himself.

Last night, I didn't comment much, choosing instead to share the words of others, mostly black women and men directly affected by this decision and overt and systemic racism. I felt it was my place to listen and to share their words. You can read all the Tweets I chose to share on my Twitter feed. There was so much more and I could not look away.

Eventually, though I had to go to bed. One of the last things I saw were the words of a black friend, saying that it's not enough for those of us with loads of white privilege to express solidarity. We need to do more.

We need to do more because of what happened in Ferguson.

We need to do more because a 12 yearold black boy with a toy gun was shot by police officers in a neighbourhood park.

We need to do more because there are so many more stories like those I've just mentioned that don't even make the news.

We need to do more because racism is alive and well at home and around the world. And yes, that applies to those of us in Canada, too.

I'm still figuring out what “doing more” means for me. Here, to begin, are my own personal guidelines for dealing with racism in my world. I don't always succeed in adhering to them but I'm working on it:

Speak up when I see racism in my own community, city, country. Every time, even when it makes those around me uncomfortable.

Talk to my kids about what happened in Ferguson and about racism. Often. And not just when it results in someone's death.

Never be defensive or fearful when others raise the subject of race. Accept that when a person of colour says, “racism exists here”, “that is racist” or even “what you did was racist”, they are stating a fact that hopefully can be fixed and not saying that I'm an irredeemably horrible person.

I'm sure there's more. Like I said, I'm still figuring it out.

Every year, the adults on my spouse's side of the family make donations in each others' names instead of giving Christmas presents. In past years, we've donated to the Stephen Lewis Foundation, EGALE,  the Canadian Breast Cancer Network, the Ottawa Hospital Foundation and the Ottawa Food Bank. This year, I'd like to propose that my family direct our donations to those working to bring an end to racist inequality and injustice. I'd suggest that those of you who can, consider doing the same.

And if you have advice, as to where donations should be focused, please share.

On October 1st (still playing catch up, bear with me), I had the privilege of being part of a lobby day organized by the Canadian Breast Cancer Network. Along with Niya Chari (CBCN's Government Relations Manager) and CBCN President Cathy Amandolea, I met with  Members of Parliament for the NDP, Liberals and Conservatives.

Specifically, we spoke of the need for greater awareness of metastatic breast cancer and funding and research needs, such as steering the focus away from early detection towards finding a cure. We addressed the fact that there is no centralized database of Canadian cancer statistics (we rely heavily on American data) and the need for a Metastatic Breast Cancer Awareness Day.

We ended the day with a reception on Parliament Hill that was attended by representatives of all political parties, despite being a very busy evening on the Hill. Daniel and Tim came too, which made me happiest of all.

A highlight of the evening was the video "Living Legacy" (pasted below). It's pretty powerful.

I was supposed to be a part of the video but I had to cancel at the last minute (I'll explain why another day). I think it's pretty complete without me. These women are incredible and just as impressive and lovely in person as they are on screen.

It was really hard to tell my story over and over. I wanted to do it though, because I know how much more effective it is to generate interests when people can attach a real person to an issue. For the most part, I really felt heard though. Cathy and Niya were brilliant and I think we did a good job getting our message across.

Metastatic breast cancer is often invisible, especially in October. This day meant a long way to making us be seen and heard.

late to the party

My last post was called, "just under the wire." I sense a theme developing here. Perhaps it's better to get things up at the last minute or even late, rather than not at all.

Last Friday was Halloween and it was a milestone for my family - the first time in 16 years that my spouse and I were home together all evening. So weird.

Sacha dressed up for school, then helped a friend with his haunted house and watched Shaun of the Dead. He ended the evening with a midnight showing of the Rocky Horror Picture Show. We didn't actually see him from the time he left for school in the morning until we heard him and his friends come in after the show. We got some of the details over bagels the next morning (a few of the boys slept over). It sounds like it was a great evening.

For the first year ever, Daniel went Trick or Treating without an adult. Two of his friends came over after dinner and they went to collect two other friends in the neighbourhood. They trick-or-treated for a while and then went to one boy's house to watch The Nightmare Before Christmas and Beetlejuice. Daniel came home tired and euphoric, with the smallest bag of candy I have ever seen on Halloween. Clearly far more time was spent walking and talking then actually trick or treating. It sounds like a great evening.


The division of labour in our house was always such that I stayed home and gave out candy and Tim went out with the boys. This was my choice. Perversely, now that I will never get the chance, I wish I had gone out trick-or-treating with my kids at least once.

It wasn't a relaxing evening in our house. Toby, the dog we adopted in May, barks when the doorbell rings or someone knocks. This happens when he thinks he hears knocking (the other dog might just be scratching herself) or when he hears the doorbell on TV. Sometimes, he even barks when he hears somebody come down the stairs in the house. So Halloween? Drove him crazy. And he whipped Lucy into a frenzy. By the end of the evening my nerves were raw but the dogs seemed pretty happy. I think they had a great evening.

I'm pleased to announce that I didn't eat any Halloween candy this year. But I might have had a whiskey. And some cheezies. They go surprisingly well together 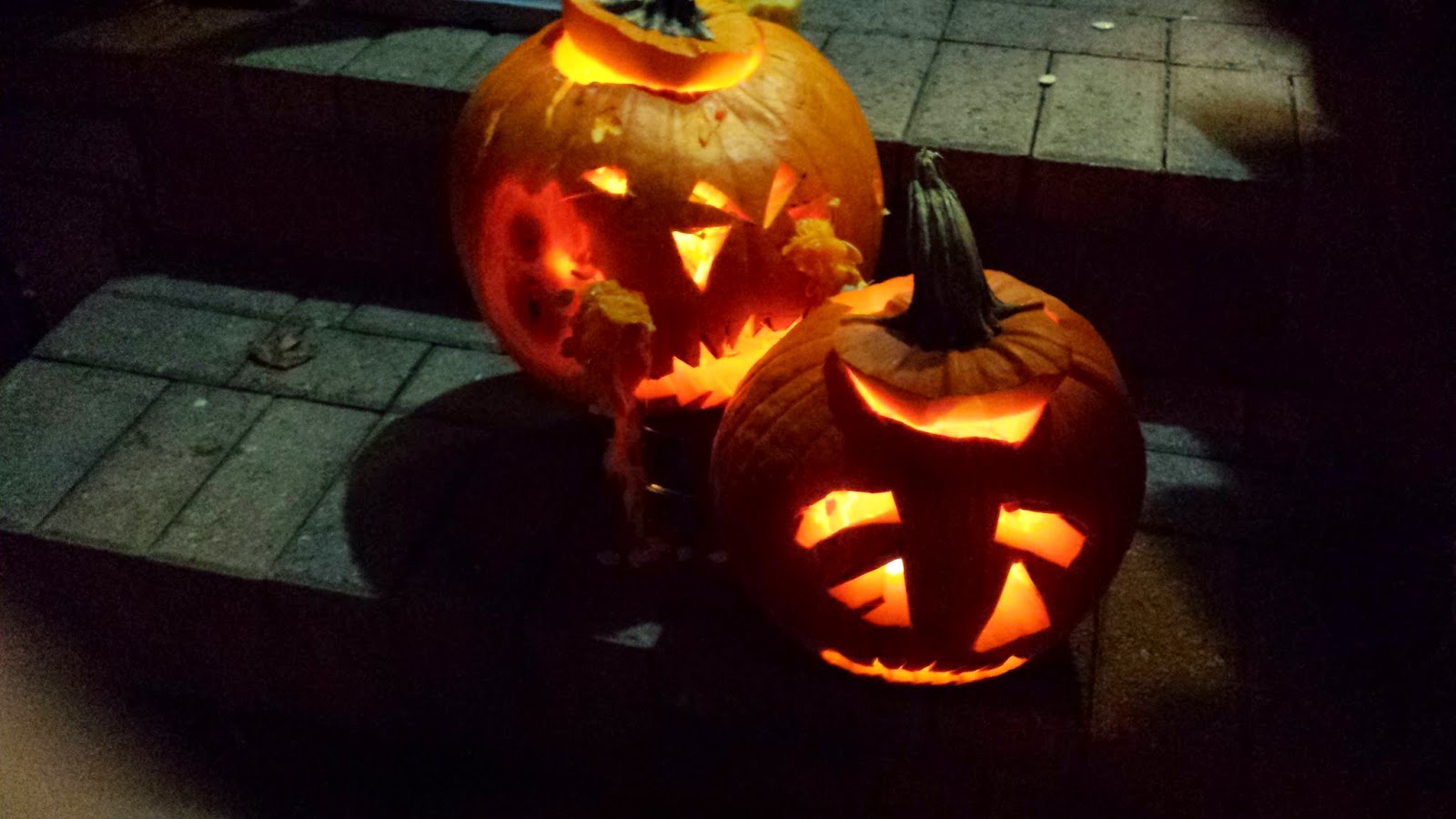