No one can understand hot flashes unless they have experienced one.


It is so much easier to appreciate the beauty of one's own community when viewed through a visitor's eyes.


This is the definition of  good friends: You don't think twice about letting your kid go to their place for dinner wearing pajamas. And when you get there you discover that their kid is still in pajamas too! 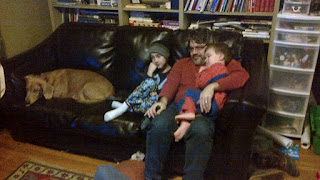 and the winner is...

Nancy from Nancy's Point! I'll be sending her a copy of Not Done Yet early next week.


Thanks so much to everyone who entered.


I'm hoping to have an ebook version of my book out soon. This will make it so much easier to send out (and no more shipping costs!)
Posted by laurie at 1:02 pm 1 comment:

not done yet: a giveaway

I'm feeling completely uninspired on the  blogging front, so I've decided to run my first ever contest.


Would you like to win a copy of my book, Not Done Yet: Living Through Breast Cancer? To enter, just tell me why you'd like to have the book (it can be serious or funny) in the comments section and I'll pick a winner at random, on Friday, January 27th. Contest closes Thursday, January 26th at midnight.


There are only a few unsold copies left, so get one while you can.


In other news, I'm reliably informed that my publisher is planning on re-releasing Not Done Yet as an ebook. No more shipping costs!
Posted by laurie at 2:12 pm 15 comments:

I've been asked by BreastCancerAnswers.com to come up with three tips I'd like to share about going through breast cancer treatment. This poses an interesting challenge. I had to ask myself, "Out of all the good advice I've received and doled out, what three things have stayed with me? Living, as I have, in cancer treatment for 6 years, what is most important."


This is what I came up with:


1. Don't be too hard on  yourself and don't compare yourself to anyone else (why yes, this is one tip - the two statements go together, OK?). Just as every cancer is different, treatments vary widely and so do our responses. Just because that you've been told that Jane worked full time and ran 5k every day of treatment doesn't mean that you ought to be doing these things. And conversely, you don't have to become a shut in just because Jane chose to stay in bed for weeks at a time. Who knows? Jane's choices may have been made because of what other people told her she should be doing. Do what's right for you.


2. When in doubt, bring a friend. People like to be asked to do specific things to help friends and family going through treatment. Don't be afraid to ask for company. Some of the meds I take leave me so wobbly I couldn't make it home without assistance. But even if I feel fine, I've been very happy to have a friend with me to provide a distraction during treatment or be a second pair of ears during appointments.


3. Live in the moment. We all want and hope to put treatment behind us. It really helps me, though, to take a look around and see the things that are good in my life right now. This doesn't come easily to me. I'm someone who lived much of my life looking ahead. I'm working on identifying those things in my life that give me great joy - and then savouring them.


I think that's it. If you've been through cancer treatment, what three tips would you share?

As a way to ease myself out of my winter ennui, my therapist suggested I do some journalling about the things that make me happy. Some of those things are probably evident to anyone who knows me even a little:


Hanging out with my kids.


Laughing with my sweetie.


Watching my dog run in the snow.


Being in a yarn store with money to burn.


But when I dug a little deeper, I came up with some things that are a little less obvious:


The moments of real connection that can pass between friends and strangers.


Having a good idea.


Eating a healthy, tasty meal I've made myself.


Clicking the "Publish" button on a good blog post.


Getting positive feedback about my writing, especially from other writers.


Looking forward to a trip, whether near or far.


Texting with my BFF.

Email ThisBlogThis!Share to TwitterShare to FacebookShare to Pinterest
Labels: community, creative, dog, good stuff, knitting, lucky, my friends, my kids, my love, show and tell, things i do for my health, travel, writing

if you can't beat it, sit in it 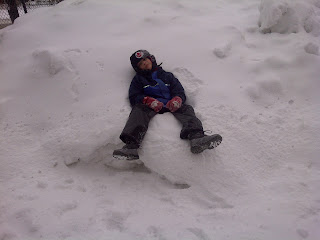 Email ThisBlogThis!Share to TwitterShare to FacebookShare to Pinterest
Labels: good stuff, my kids

if it's not on a list, then it doesn't exist

If I have any latent OCD going it, the condition manifests itself in the form of making lists. My name is Laurie and I am a compulsive list maker.

I have to-do lists (of course).

I also track how much exercise I get (only 130 minutes so far this week. I got off to a slow start) and how many minutes I spend cleaning the house (it's a lot more than you'd think, if you ever saw my place).

I track how many minutes I spend writing and how much time I spend online. I track my weigh and - since January 1st- the number of calories I'm consuming.

It's an addiction. Writing lists and keeping track of things soothes me the in the same way that a piece of fudge can take the edge of a bad day. As with the fudge, I'm not entirely convinced that it's helpful. But I have no intention of stopping.

In the years since I stopped working at a paid job, I think the lists provide the illusion of the structure that I miss terribly. Sometimes, when my life is feeling out of control, just making a few lists can make me feel calmer.

As long as the lists don't get too long, or there aren't too many of them, I don't think there a bad thing. The trick is not to let my self-created lists oppress me into paralysis. Or become so time consuming that keeping on top of my lists takes up my whole day.

Maybe I should make a list of all my lists, just to make sure there aren't too many.

What Catholic girl (former or otherwise) doesn't learn to feel guilty at a very young age? I was always a bit of an overachiever. I'm good at Guilt.


I feel guilty that I have No Evidence of Disease when other wonderful women have died.


I feel guilty that I'm not working.


I feel guilty that I have insurance.


I feel guilty for being alive.


And, with every clean scan, every month that I continue in treatment that does not include chemotherapy, the guilt just gets worse.


It's not very constructive.


I need to figure out how to free myself from the Guilt. It distorts my perception of myself and others like a greasy hand-print on the lenses of my glasses. I have to figure out who I am and what I want, without having to squint or interpret what's on the other side of the smudges.