a man, a boat and some respite

I was listening to the radio this morning and I heard an interview with a man who was sitting in a boat outside his flooded home in Calgary, fishing. He said that his furnace, freezer, everything in his basement and much of his first floor were submerged in water but he was making the best of it.

"People pay thousands of dollars to do what I'm doing. How often do the fish come to you?" he asked the interviewer. "I can sit and be miserable or hang out like this and keep a smile on my face for a couple of days."

I was quite taken aback with this interview. At first, it seemed like an incomprehensible attitude to have in the face of such tragedy. But as I thought about it, I realized that not only do I understand, I can relate.

I don't actually believe that the guy has been sitting in his boat and smiling for the last few days, or that he's immune in the face of loss. He's just found something, in spite of all that's happening, that makes him happy. No matter what is going on in any of our lives, there is hopefully at least one good thing that we can cling to like a life-raft, something that brings respite while we gather our strength to face all that lies ahead.

I would never choose to have been diagnosed with cancer. I would never wish what I've been through on anyone. But there have been so very many good things - the friends and loved ones who've rallied around, things I've learned about myself and a new appreciation for all the good things - that have sustained me through the darkest times.

I hope it goes without saying that I don't think everything happens for a reason. The floods in Alberta have been horrific and terrifying. This is a tragedy of enormous magnitude.

It's just that this morning I listened to that guy, fishing in his boat while his home was underwater and I felt that I understood him.

what did i do wrong?

OK internet, help me out here:

I've been looking for a recipe for healthy snack bars, to replace store bought "chewy" bars. The bars can't contain nuts or peanuts.

My nutritionist sent me a recipe for Chocolate Date Protein bars. I made the bars, following the recipe exactly and ended up with a very, very tasty paste - too sticky to be rolled into balls, let alone made into bars.

She's away indefinitely and I can't find a comparable recipe online. Can someone figure out how to give these bars more integrity?

I used ground hemp. Could that be the problem? Is it possible to buy whole seeds? Would that help?

I don't want to post someone's recipe online but you soak the dates and then blend them with the cocoa and sweetener and then add the hemp seeds for a few seconds at the end. There's no cooking - you just chill it in the fridge.

I'm also in the market for healthy and nut-free snack bar recipes. Any thoughts there would be appreciated as well.

learn how to be a better advocate

The Canadian Breast Cancer Network has announced that it will be holding an "Advocacy Training Session" in Halifax, Nova Scotia on September 13-14:

"The advocacy training will focus on the issue of metastatic breast cancer and will offer participants the opportunity to enhance their communication skills and effectively deliver strong advocacy messages to a wide variety of audiences."


Priority will be given to women living with metastatic breast cancer, primary caregivers of those living with  mets and to applicants from the Atlantic Provinces. CBCN will be covering all expenses including, travel, accommodations and group meals for those who are accepted to participate.

Hopefully, come September, some of us will learn how to feel a little less lonely and a little more empowered. And we'll have learned how to share all that with others.

the good side won

I don't get to say that very often.

In a unanimous decision, the US Supreme Court ruled today that genes cannot be patented. They were specifically addressing the patenting of BRCA1 and BRCA2 genes by Myriad Technologies, a company that claimed the right to conduct all testing for genetic predisposition for breast and ovarian cancers.

The impact of Myriad's patent was widespread. Several Canadian provinces were ordered to "cease and desist" testing of the BRCA genes. Instead, the provinces were ordered to send the genes directly to Myriad labs, at a dramatically increased cost. Disregarding the order has put Canadian provinces and hospitals at risk of being sued, rendered testing more expensive and, in some cases, halted testing completely.

Patenting also has the potential to deter researchers from engaging in research involving patented genes.

On behalf of the Supreme Court, Justice Clarence Thomas wrote  “A naturally occurring DNA segment is a product of nature and not patent eligible merely because it has been isolated" and ""Myriad did not create anything. To be sure, it found an important and useful gene, but separating that gene from its surrounding genetic material is not an act of invention."

That's pretty clear. And it should have been obvious. You can't patent parts of our bodies.  But the Association for Molecular Pathology, the American Civil Liberties Union, Breast Cancer Action and some very brave women had to take it all the way to the US Supreme Court.

Actress Angelina Jolie brought worldwide attention to the genetic testing, when she wrote an op-ed last month for the New York Times in which she wrote about choosing a prophylactic double mastectomy after testing positive for a BRCA gene. Hopefully, this ruling will eventually mean that more women can choose testing that will allow them to make more informed decisions about their own health.

Want to know more? You can read the Supreme Court ruling for yourself or click on the links throughout this post.

I think this might be the first time I've agreed with Clarence Thomas on anything.

Here's a very short (less than two minutes) , very effective video by the ACLU that explains why you shouldn't be able to patent our genes:

justifiably annoyed or overly sensitive? you tell me.

I read an article a little while ago about a Conservative politician who just finished treatment for breast cancer. The article was probably meant to make me feel inspired but instead I just go angry.

I felt guilty for not being more charitable (is that a word used in this sense by anyone other than those raised Catholic?) and disappointed in my own lack of empathy.

I bookmarked the story and decided to postpone writing about it until I could understand my reaction.

It's been a couple of weeks. I reread the article and got angry all over again.

I work very hard at not being judgmental of others' choices. This is a hard thing when you hold strong opinions but I do try my very best to underline that I've made what I consider to be the best choices for me. So why am I so annoyed at the choices of someone else?

Paula Peroni (the Conservative politician from Sudbury) is to be commended for her strength. Her approach to diagnosis and treatment seems to be very different from my own. She wore a wig, never stopped working, and told no one until after she had finished treatment. She seems most concerned that someone will think less of her for having had cancer. Perhaps that comes with being in politics.

While Peroni seems to stress that these were the right choices for her, the writer of the article seems to frame them as a goal to which we all should aspire. And Peroni herself seems to frame the path she chose as being the most virtuous:


"When you tell people you have cancer, "you put a responsibility on them they didn't ask for," said the longtime trustee with the Sudbury Catholic District School Board.

They care about you and worry about you, so you don't want to add to their burden.
'It's nice to tell people (about it) when I'm on this side of it so they don't have to do the guilt and the worry or the condolences or whatever it is they feel is necessary,' said Peroni."

We all have a right to privacy but someone who chooses to stay private is not morally superior or more altruistic than those of us who make our struggles more public. I don't think it's just a "burden" to share our stories. In my experience, people genuinely want to help and I think that helping each other makes us stronger individually and together.

There are many kinds and cancers and as many kinds of treatment. Some people get sicker than others from the illness and its treatment. Some need more help from outside the immediate family, for a whole host of reasons. There is no shame in this.

And finally, perhaps it's my own metastatic status that colours my response. We are immersed in a culture of pink and a belief that you've just go keep a smile on your face, go through it and move on - and if you can do it without missing a step, you are to be applauded. Those of us with mets very often feel invisible.

Is this all just my own baggage speaking? Go read the article. Come back and tell me what you think. I'd love to know.

"Peroni believes she is where she is supposed to be and if there was ever a time for Sudbury
to go Tory blue, it is now." Does this "work that needs to be done" involve deep cuts to the health care system from which she has so profoundly benefited?

doors open - an excuse for frivolity

I have a long overdue post up at Frivolity (getfrivolous.com). We had such a good time at Doors Open Ottawa! 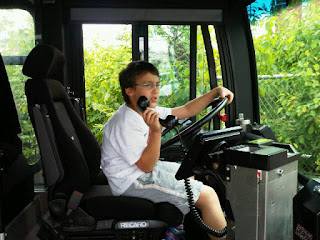 Daniel "driving" an OC Transpo bus.
Posted by laurie at 7:19 pm No comments: