Last week, Tim and I met with my new radiation oncologist. Dr. C is a walking talking Gallic stereotype, with a rumpled white coat and a turned up collar. He was full of sighs, snorts, "Boff!"s and very eloquent shrugs. Both Tim and I observed that the only thing missing was a Gauloise emerging from between his lips. 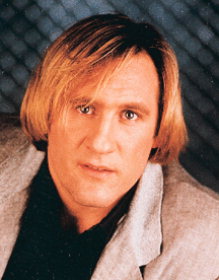 Not my radiation oncologist. This is the French actor Gerard Depardieu, to whom Dr. C. bears a remarkable ressemblance. (photo IMDB)

After asking how it was that my tumour had been found (he was surprised that I had asked for the MRI), Dr. C shocked us by putting three options on the table:

Whole brain radiation (which he noted is still the standard treatment for brain tumours in most of the country).

Surgery (which is possible because my tumour is on the surface of the cerebellum).

Cyber Knife radiation treatment (which is the only option we were expecting).

Dr. C offered no advice as to which we should choose. He told tell us that there are no clinical trials and no longitudinal studies to guide us because most patients with brain tumours don't live enough to be studied longitudinally. On the other hand, it's really unusual for a patient to have only one small tumour.

The size and singularity of my tumour are very positive things but they make it really hard to base my decision on anyone else's experience. For example, whole brain radiation (WBR) "treats the whole brain" (as Dr. C helpfully pointed out when I asked him the advantage to that treatment). The rates of overall recurrence are lower with WBR. However, the treatment also causes permanent alopecia and can cause permanent cognitive damage. It seems to me that it's a bit like taking a sledgehammer to hit a single nail - you end up needlessly damaging the plaster.

I've decided that WBR is off the table for now (keeping it as an option to treat future tumours).

With surgery it might be possible to clearly cut out the tumour. However, it's still surgery with all it's risks, pain and side effects.

Cyber Knife has very few side effects (in the words of Dr. C "almost nil."). There is a risk of necrotic (dead) tissue needing to be removed surgically in a few months' time.

Dr. C wasn't condescending or impatient just painfully honest. I am once again navigating the land of the cancer unknown. Perhaps the surgeon to whom I'm being referred will have some insight.

WBR is the standard treatment and may prevent future recurrences. However, I have no indication that there is another tumour developing soon and WBR comes with some nasty, permanent side effects.

Surgical techniques are being refined all the time. A surgeon may be able to more clearly extricate the tumour. However, I do not relish having my skull cut open and the subsequent pain and recovery time.

Cyber Knife is reported to be as effective as surgery, painless and with few side effects. On the other hand, some of those reporting this are the owners of the company. I don't relish the possibility of necrotic tissue but I do love the idea of walking away after a 40 minute session.

I kind of wish I had a three sided coin. Or a crystal ball. And then there is this guy in Italy with a brain tumour who hacked his medical records, posted them online and got advice from all over the world.

I wish I knew how to do that.

Meanwhile, I have a CT scan and Cyber Knife mask fitting on November 9th, an MRI on November 11th, a consultation with a surgeon on November 13th. I have a Cyber Knife appointment booked for November 23rd, in case that's the route I choose to travel. All these dates have been booked in the last couple of days. I still don't know what I'm going to do but it feels good to be moving forward.

You ARE moving forward. hugely impressed by your clear thinking. Really great to lay out the options and book dates just in case. Thinking of you and knowing whatever you choose it will be the right course of action xo C

Wow. That's a lot of options.

And I am amused that your radiation oncologist reminds you of Gerard Depardieu because that just seems *right*.

Thanks you too. I found him pretty amusing too. I was actually pretty distressed when they booked me in for cyber before I'd heard from the surgeon but I feel much better now.

Good luck to you as you move forward - sounds like things are happening, despite the difficult decisions. ~Catherine

I think this decision appears to be the obvious choice between the three. Tough to know anything for sure in the quagmire of uncertainties, but it doesn't seem to take anything off the table for future.

Thanks to you all. As an out loud processing kind of person, I find every thought you share to be helpful.