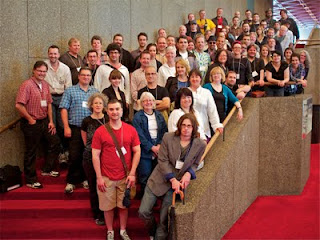 PAB2011 group photo by Maurizio Ortolani, uploaded to flickr by Martin Jones.
A chance encounter on Bank Street with my friend Andrea Ross led to a plan for a dog walk, which led to a conversation about "PAB", which led to me having my mind blown.
The conference is called PAB 2011 (short for Podcasters Across Borders), and is for anyone who is a creater of "content" of any kind, using any medium. You don't have to know a thing about podcasting to attend, just an open spirit and a readiness to share and absorb ideas. It took place this past week end (June 24-26) and my brain is still very, very full.
This year's theme was "Your story needs to be told. Well." As with every year for the last few, the venue was the wonderful Fourth Stage of the National Arts Centre (no fluorescent lights!) and the setting was intimate. There were two longer keynotes and many more 5 minute "jolts" (this link is to Andrea's amazing jolt from last year, which I have quoted many, many times), juxtaposed with 40 minute presentations and questions from the audience.
There was so damn much to take in and almost as much to tell that I'll be brewing blog posts for the next few days (which will make a change around here. I've been an unmotivated blogger of late). For now, I'll just say that my brain is resonating like the inside of a bell.
I am very, very grateful. To Andrea for her friendship and inspiration, to Mark and Maureen for donating a ticket they could'nt use (and asking for nothing in return) and to Mark and Bob for concocting, creating and coordinating this indescribable thing that is PAB.

you're welcome, Laurie and I am glad it had a positive impact on you. Knowing it results in positive waves in the world, takes the sting out of my missing the conference this time around.

I'm looking forward to meeting you next year and, I do believe, this means you owe me a beer or tea or, at the least, a hug...xxoo
moe

I saw your tweets and didn't know what PAB stood for. I enjoyed your insights this past week as much as I did when we first met at BlogHer! Thanks for sharing them here and on Twitter!