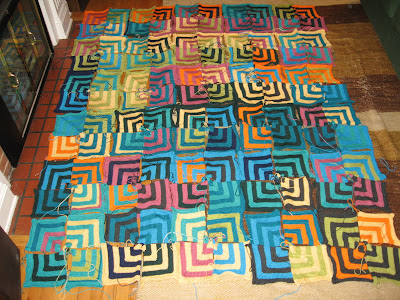 I've laid them out randomly, in order to try and figure out how to lay them out. Wishing my artist friends were handy to tell me what to do. I feel like I'm too close to it.

There are a couple of squares I think I need to unravel and reknit, though: 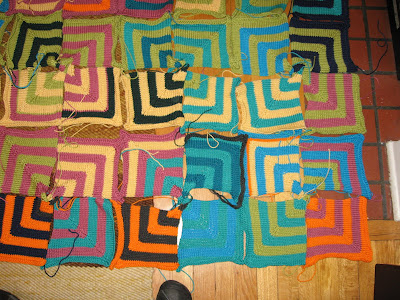 See that one with the dark border? It's got to go.

I'm also wondering about the low contrast (light blue and turquoise) one just beneath it. There are two of those and I think they might have to go, too.

I think I'm going to keep it like this for the week end and play with moving the squares around a little.

Update: I came home to find that one of the pets (not sure if it was the cat or the dog) did a little creative re-arranging while I was gone. 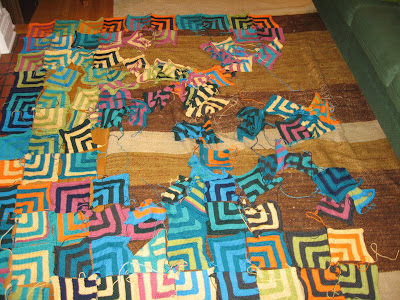 Maybe I'll just sew the squares together randomly.
Posted by laurie at 9:38 pm

just a few thoughts..........try looking through your camera lense to work out whether there are squares that don't work colourwise (no, not a typo downunder we spell colour with a 'u' in it!) or whether there's blocks of colour that jump out at you. there's also the option of going for darker colours in the corners to draw the eye outwards or try the colourwash idea, creating a gradual flow of colour ......personally however i like the truly random approach - put them in a pile and just take from the top each time!

Thanks, Kate! This is very helpful (and am leaning to the more or less random). And we spell colour with a 'u' in Canada, too!

This is going to be such a beautiful blanket and made with love, no matter how the colours :) shake out.

Such an ambitious project! After this is seamed, what will you knit next?

Next project: something small!

I like the low-contrast squares, even though there are only two, I think that they make it interesting on the eyes. The whole blanket is really beautiful.

Dawg! What helpful (snick!) pets you have...they must be related to mine.

I only noticed that the side that was closer to the camera (pre-cat-or-dog) had more turquoise/black, and maybe that should spread out a little more, but I think it's just beautiful.

wow, it looks amazing! I'm not keen on the light ones either so reknitting might be a good idea. can't wait to find a way to snuggle under it sometime. Congrats...and I still think the sewing party is a damn fine idea.

I have a few thoughts too, though most echo others. I think the best approach is "almost random." By that I mean there should be no discernible pattern - no repeating, no moving from light to dark from outside in or top to bottom.

I say "almost random" because my little math friends always remind me that truly random arrangements might actually result in the kind of pattern I'm suggesting you avoid.

Regarding the low contrast squares - I don't love 'em in the picture, but they might present better in reality, so I've got no counsel on the reknitting front. But I would say that these are the only squares that seem to really not work with certain other squares. So, if you keep 'em, I would think carefully about that which they abut. (Not really sure, but I think they work better next to squares with which they have no colours in common.)